This represents a rally of about 36% that has seen Bitcoin’s market capitalization increase by approximately 26% from $824,619,217,608 on September 30 to the current value around $1.025 trillion according to data from

Bitcoin’s market cap took a breather at around $988 billion on September 06 before the BTC price plunged to below $43,000 during the September 07 crypto market flash crash.

This is the first time on five months that the market capitalisation of the flagship cryptocurrency has surged above the $1 trillion mark. The last time the BTC’s market value was above this mark was in May 11 at $1.062 trillion. Before then, Bitcoin’s market cap was oscillating above and the below the $1 trillion mark before May’s bearish leg.

Technical indicators could bolster investors to buy Bitcoin as they show that BTC price sits on strong support at the moment.

There are a number of factors that validate this outlook. To begin with, Bitcoin is sitting on strong support provided by the Simple Moving Averages (SMA) with the 50-day SMA at $47,218, 100-day SMA at $42,520 and the 200-day SMA at $44,996. These support areas are robust enough to keep Bitcoin bullish in the long-term.

In addition, BTC/USD price immediate support around the $53,124 area is strong and daily closure above this level could see big crypto rally towards he ATH which less than $10,000 away.

This strong support is accentuated by data from IntoTheBlock’s In/Out of the Money Around Price (IOMAP) model which shows that BTC’s immediate support is robust. It is within the $52,550 and $54,128 price range where approximately $515,780 BTC were previously bought by approximately 712,990 addresses.

These investors might want to push the Bitcoin price higher in order to take profits at higher prices.

The same IOMAP chart shows that BTC price support downwards is very robust and that the path is with little resistance is upwards towards the ATH.

“Bitcoin finishing above its ATH would be super positive to keep pushing towards the inevitable,” tweeted David Gokhshtein, Founder and CEO PAC Protocol. 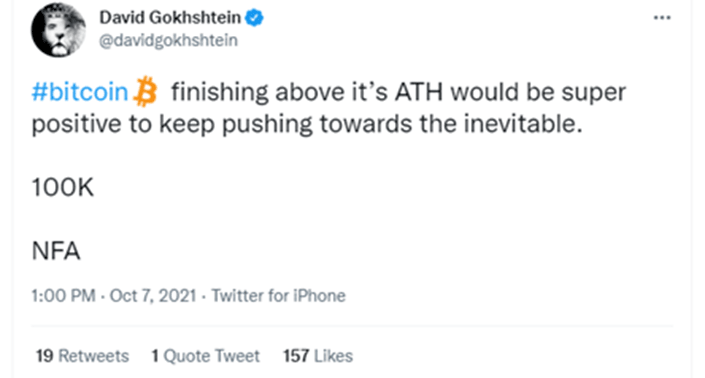 However, if things go awry for the Bitcoin bulls, we could see a retracement for BTC price to $45,000 or even $40,000 should the bellwether cryptocurrency retest all-time highs following the current rally.

Asian CBDC projects: What are they doing now?

Impossible to Run Away From Cryptocurrencies Says Zimbabwe Finance Minister