BTC/USD – Daily Chart
The BTC/USD daily chart reveals that the crypto market, as traded with the price valuation of the US Dollar, holds in $64,000 and $60,000 levels. There have been some times that the smaller value-line briefly breached, finding supports by the market. The 14-day SMA trend line is above the 50-day SMA trend line. And, they are both pointing toward the north side underneath the current trading spot. The Stochastic Oscillators have dipped into the oversold region with the lines crossed, pointing to the east. That suggests that a pause may play out soon at the lower-end value-line mentioned.

It appears necessary that the BTC/USD price still has to rebuild its stance from a lower trading zone as the market holds in $65,000 and $60,000. It has established that the crypto market gets back its energy severally after touching a lower point around the smaller value line. And, from the technical viewing point, the market may still have to make some degrees of down-pulling to make a better re-swing for an upward trend continuation.

On the downside analysis, the BTC/USD market bears have to exercise patience in exerting sell orders around $60,000 level. Any active depression motion attempted at that trading zone may get back quick rebounds in no time. As a result, it would be more technically inclined to await or be on the lookout for price rejection trading outlook at a higher zone afterward to consider a short order. 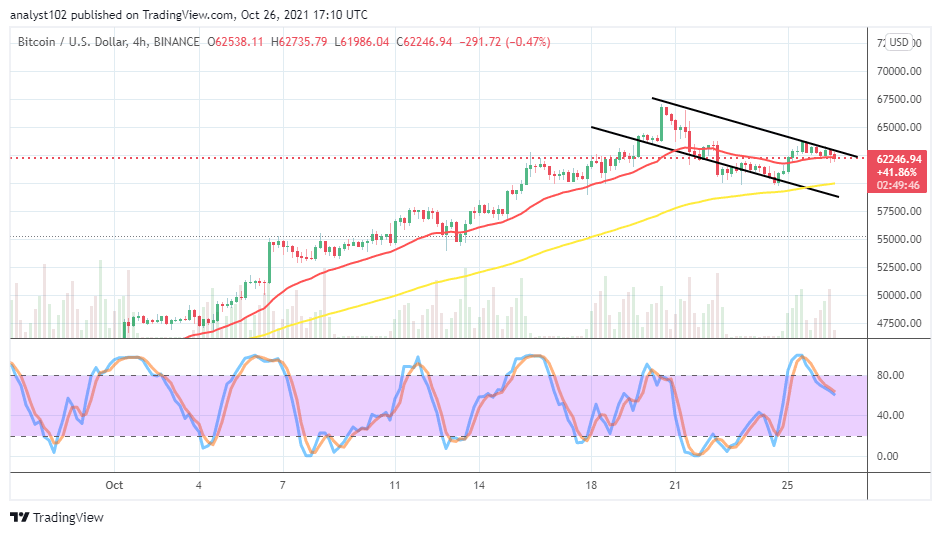 The BTC/USD 4-hour chart shows that the crypto market holds in $65,000 and $60,000 levels as bearish channel trend lines drew to picture the pace of price retracement motions. The 14-day SMA is over the 50-day SMA. The Stochastic Oscillators have bent southbound against the range line at 80. It appears that the market may still go under in its correctional-moving manner. Therefore, the smaller value-line mentioned earlier will have to play a critical role as usual in the recent past to determine the subsequent direction if that assumption plays out.

68% of retail investor accounts lose money when trading CFDs with this provider.