Following the bearish impulse of December 17, Bitcoin bulls have made four attempts to breach the $50,000 high as Bitcoin risks decline below $45.5K. However, since December 13, BTC/USD has been fluctuating below the $50,000 price level. The upward move has been restricted below the recent high. Today, BTC’s price reaches the high of $45,932 at press time.

Bitcoin (BTC) has been in a range-bound move after the December 4 price slump. Initially, the cryptocurrency was fluctuating between $47,000 and $52,000 price levels. For the past week, Bitcoin has been trading in a tight range between $45,500 and $50,000 price levels. Buyers have failed to keep prices above the $47,000 support as bears gain more ground. The current downtrend was rejection at the $48,000 high. Since December 12, the uptrend has been restricted below the $50,000 high. The bears are attempting to break below the $46,000 support. Bitcoin will rally above the $50,000 high if it rebounds above the $46,000 support. Conversely, the market will decline sharply to the $41,000 low if  the bears break below the current support.

Bitcoin is at level 35 of the Relative Strength Index period 14. Bitcoin is in the downtrend zone and it is approaching the oversold region of the market. The 21-day line and 50-day line moving averages are sloping southward. The 21-day line moving average is acting as a resistance to Bitcoin. BTC price is below the 20% range of the daily stochastic. The price indicator suggests that Bitcoin has fallen to the oversold region of the market. The selling pressure is likely to subside. 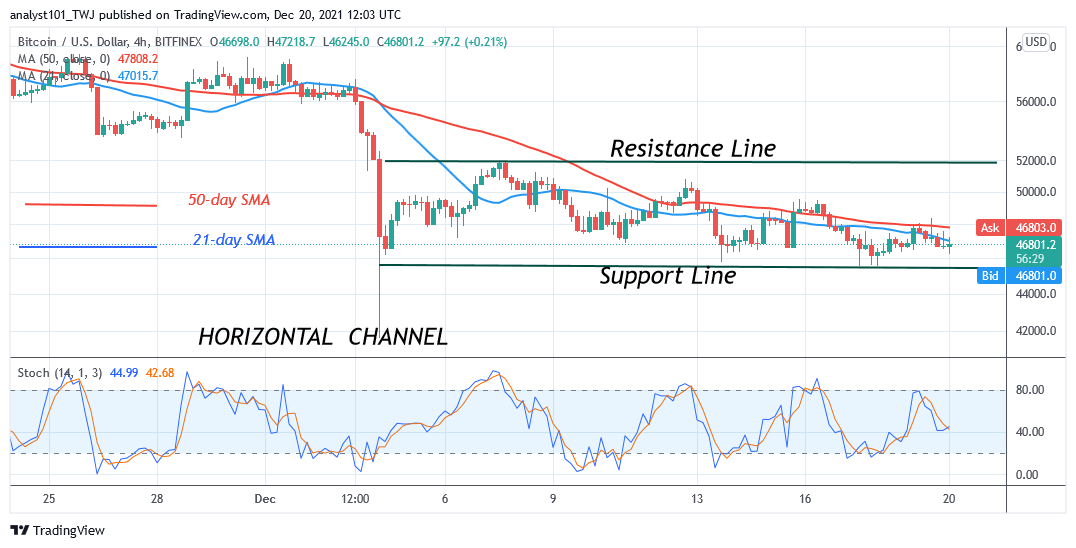 Since December 4, the cryptocurrency has been fluctuating between $45,500 and $52,000 as Bitcoin risks decline below $45.5K. Today, the bears are attempting to break the lower price range of $45,500. If the bears are successful below the current support, Bitcoin will risk deeper correction. The market may decline to $41,000 or $42,000 low.

Bitcoin Price Prediction: BTC/USD Gets Ready for a Spike Above $37,000