The cryptocurrency market is in a tailspin right now. Its total value has declined from roughly $2.4 trillion to $2 trillion within 24 hours, a 16% drop. Major coins such as bitcoin (BTC), ethereum (ETH) and cardano (ADA) have fallen by similar percentages, while smaller altcoins have tanked by as much as 25%. However, while this correction has put an abrupt stop to the bullishness of the past couple of weeks, it sets the stage for a strong recovery. As such, we’ve compiled a list of the 5 next cryptocurrency to explode. This covers coins most likely to rebound impressively from yesterday’s plunge.

5 Next Cryptocurrency To Explode

As with the rest of the market, things don’t look great for BTC. However, the market almost never rebounds without bitcoin rebounding first. Because of this, it’s always a (comparatively) safe bet to on bitcoin if you think the market will recover soon. It leads falls and it leads rises, so it will likely lead the next market recovery.

Indeed, various technical models and forecasts hold that BTC will end the year higher. Most notably, the stock-to-flow model predicts a year-end price of around $100,000.

On-chain (non-S2F) indicator shows no sign of a top yet (no red dots). This is in line with S2F forecast pic.twitter.com/1lGguuhyST

And back in July, a panel of 42 cryptocurrency executives and researchers arrived at an average end-of-year price prediction of $66,284. This was based on the argument that bitcoin was (and once again is) undervalued. Some experts on the panel suggested an even higher price.

“Adoption by corporations and institutional investors paired with a loose monetary policy and high asset inflation will propel Bitcoin to 6 figures before the end of this year,” said Morpher CEO Martin Fröhler.

So given bitcoin’s status as the markets bellwether, and given forecasts, it goes on our list of the 5 next cryptocurrency to explode. 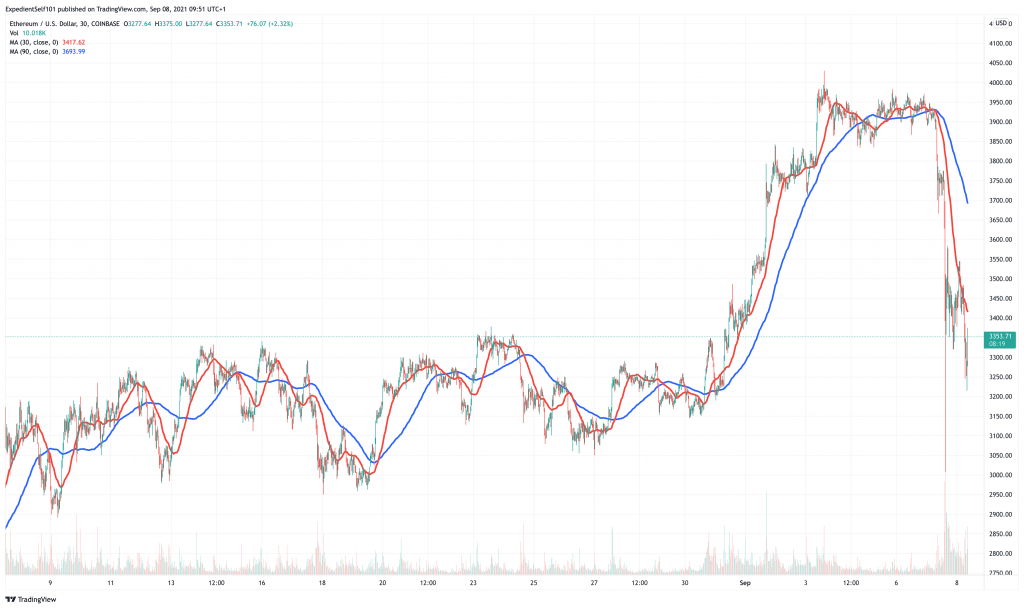 Despite the pronounced dip, there’s every reason to be confident in ETH. Most significantly, Ethereum has been burning a portion of its transaction fees ever since its successful London hard fork of August 5. Since that date it has burned over 100,000 ETH.

Because of this burning, ETH’s daily issuance has dropped below bitcoin’s. And with increased DeFi and NFT volumes in the weeks and days leading up to yesterday’s crash, Ethereum became deflationary, with more ETH being burned than issued.

More ETH was burned in the past 24 hours than issued pic.twitter.com/mhY7NA69kd

This supply squeeze is why ETH is one of our 5 next cryptocurrency to explode. And with Ethereum 2.0 on the horizon, some supporters are even predicting it will flip BTC.

If you own no $ETH it’s gonna be a tough decade for you.

Flippening no later than one year after ethereum launches proof of stake. pic.twitter.com/c86EvIZ37L 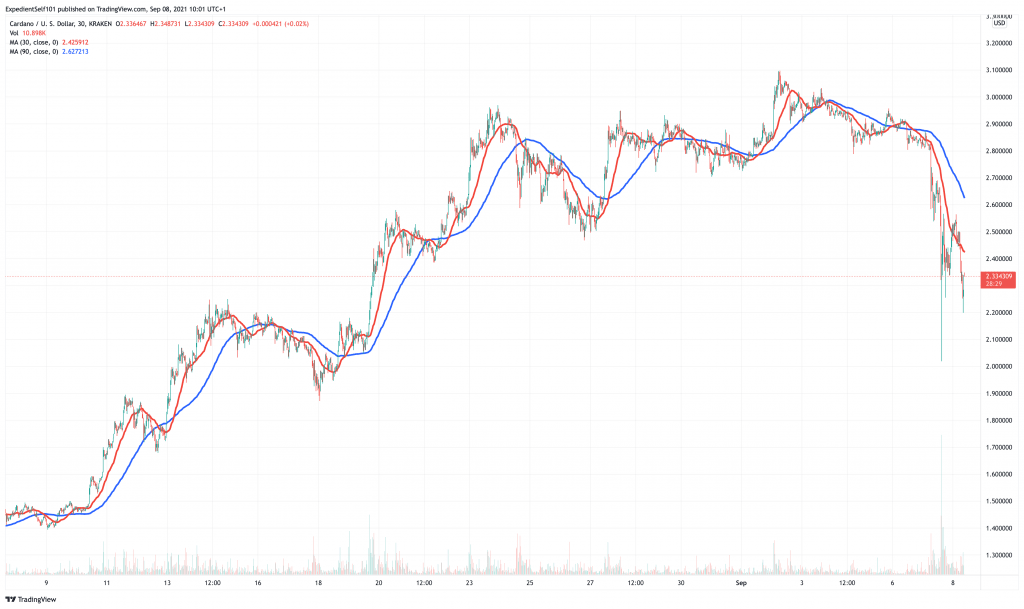 ADA is another strong contender to rebound vigorously because of what Cardano has in its pipeline. On September 12 (this Sunday), it’s due to roll out the Alonzo upgrade, which will introduce smart contracts to the platform for the first time. With smart contracts, it will be able to host decentralised apps and build its own DeFi/NFT ecosystem to rival Ethereum’s.

Yesterday, we upgraded the #Cardano testnet, successfully deploying #Plutus #smartcontracts capability. The focus now is on final component testing & exchange integrations, ahead of the #Alonzo mainnet upgrade, still on track for deployment on 12 September

According to founder Charles Hoskinson, over 100 companies have been waiting to launch on Cardano. A recent update on the Cardano ecosystem also found that it had integrated a similar number of projects in the buildup to Alonzo’s implementation.

In just 3 months, Cardano has integrated 100 more projects spanning from DeFi to NFT.

Next target for $ADA should be $10

Solana (SOL) had been surging prior to yesterday’s mini-crash, and there’s a good chance it could surge again. Even though it’s down by 11% over the 24 hours, at $160, this represents a 47% jump in the past week. It’s also a 124% increase over the last fortnight and a 325% rise across the past month. These gains make SOL one of the best-performing cryptocurrencies of the last 30 days. 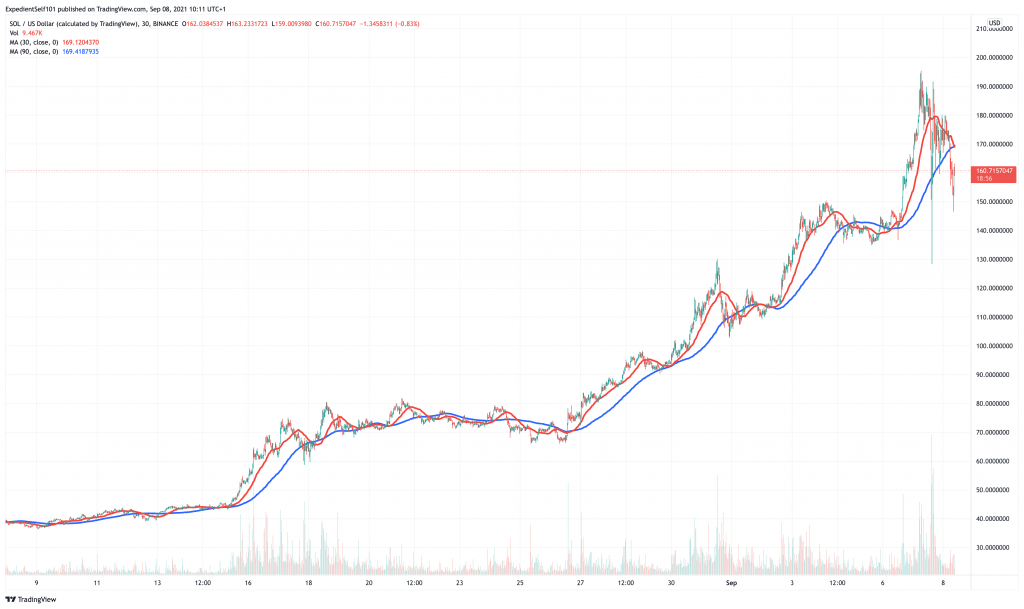 SOL has been a major beneficiary of Wormhole, which launched on August 9. This is a cross-chain messaging protocol, enabling users to transfer tokens between Solana and other chains (Ethereum, BSC and Terra). It has facilitated a massive growth in the Solana ecosystem.

Solana’s total value locked has risen to nearly $6 billion since Wormhole’s launch. It had stood at $1.3 billion as recently as the start of August, meaning it has risen by around 360% in a month.

Solana is also attracting more adoption in general. Its Solanart NFT platform launched two months ago, and managed to break one million SOL in total volume by the end of August.

Thank you for making us number one

Because of Solana’s ongoing expansion, it deserves a place on this list of the 5 next cryptocurrency to explode. It is one of the likeliest coins to recover strongly. 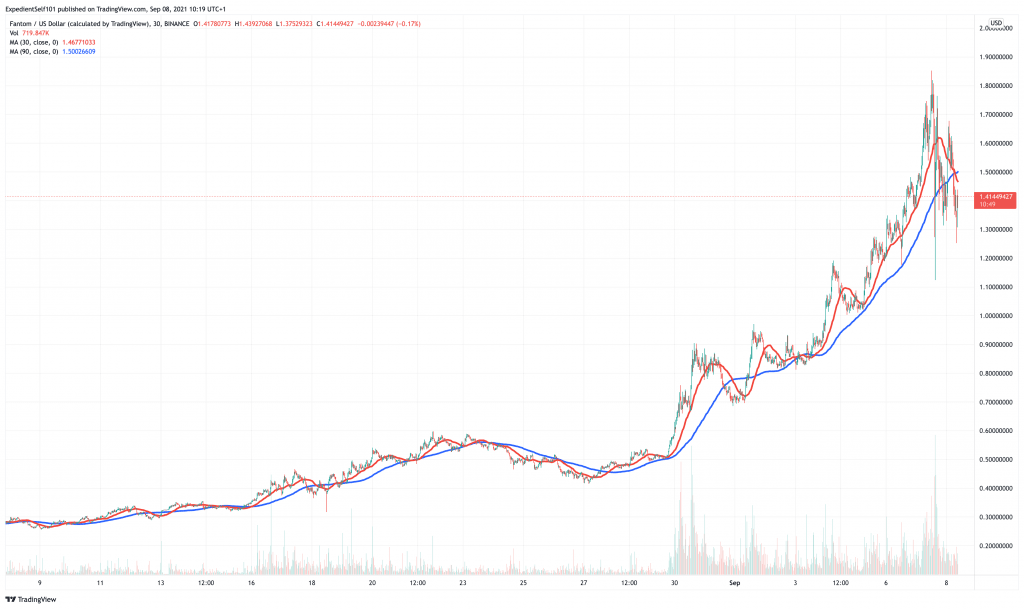 It is one of the best-performing coins of the last month. Its performance has been supported by market-wide bullishness, on the one hand, and by its own growth, on the other. It recently launched an incentive program aimed at rewarding DeFi developers who build on its platform, setting aside 370 million FTM in order to fund programmers.

If you’re a protocol team, we’ll reward you for sustaining and increasing your TVL on Fantom.

Impressively, Fantom processed more transactions yesterday than Ethereum. This is a testament to its strong growth, and shows why its one of our 5 next cryptocurrency to explode.